Did you know the KUR-World development site has belched tonnes of clay from the failure of the dam wall – upstream of Owen Creek in Myola? This environmental disaster happened in December 2015 and still hasn’t been cleaned up.

The sediment load is waiting for rain to carry it down to critically endangered Kuranda Tree frog habitat, then into the Barron River, out to sea onto the struggling Great Barrier Reef. There is no good reason why it shouldn’t have already been cleaned up 22 months later.

On 21 November 2017 the community petition was submitted to Mareeba Shire Council and Department of the Environment and Energy.

106 residents and ratepayers had their say.  Click here to read the comments

Thank you to everyone who got involved in helping to get the rainforest creek cleaned up!

This petition will be left in place and available for community submissions until the creek has been cleaned up. 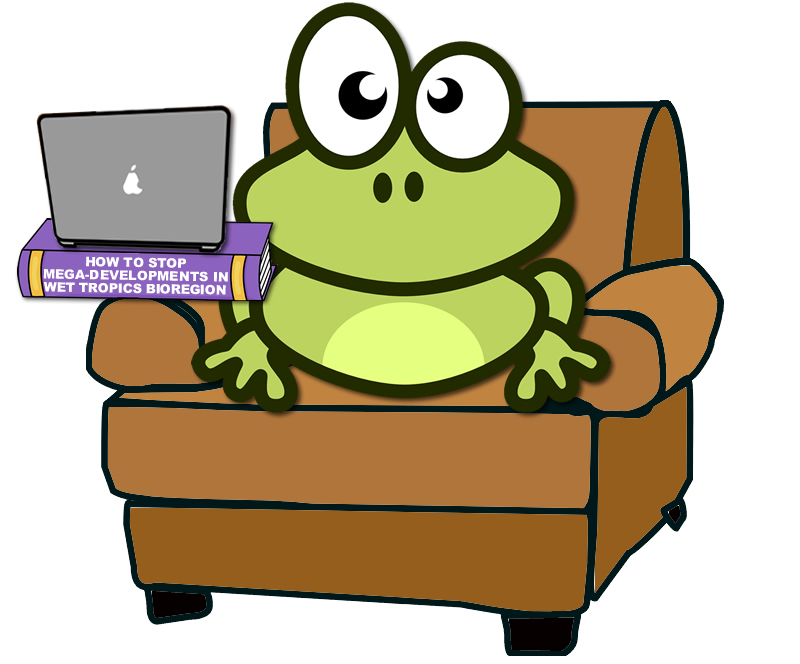 Mareeba Shire Council, Department of the Environment and Energy

We demand legal proceedings against the developer commence immediately by the department.

We demand a clean-up in the rainforest creek behind the failed mega-dam wall to prevent further devastation of critically endangered Kuranda Tree frog habitat.

The responsibility of the department is to protect the Australian environment. It is the duty of office bearers to enforce legislation when breaches are clear.

On the development site:

– illegal land clearing were carried out without a permit

The knock on effects of the initial action continue 22 months later.  At the time of writing, tonnes of clay lost from the dam wall coat the rainforest creek floor inches thick for 200 metres downstream.  As of now, the developer has failed to clean up the mess.  In time, the pollutant will enter the Barron River and move downstream to the Great Barrier Reef.  Downstream resident’s bores have been affected.  Litoria myola breeding habitat is destroyed. [see video below]

Mareeba Shire Council has dismissed the environmental disaster as folly of a single landowner.  Ken Lee Reever and Ocean (Developments) Pty Ltd, the developer, had at the time contracted a town planner and ecologist who were fully aware of the regulations around land preparation, even if the developer was not.  Failure to follow Australian Law has meant:

– illegal earthworks were carried out without a permit

– knowledge of, and failure of the dam wall was first reported to council by residents adjoining the property when the creeks became polluted

We do not accept these actions (“track record”) by the developer as commensurate with sound environmental development practises for a $650 million development in the ecologically critical Myola Valley corridor, World Heritage Wet Tropics Bioregion [see JCU Distinguished Professor Bill Laurance video below].

We do not accept the developer’s approach of “shoot first, ask questions later” as precedent for future developers and their contracted companies in our region.

The development site is 100% catchment for sensitive rainforest creeks.  50% of endemic Kuranda Tree Frog breeding habitats will be affected by the proposed KUR-World development.

Intensive residential development in the Myola Valley is contrary to current Shire Plan and the FNQ Regional Plan and majority public opinion in the area. No such development should be approved – and major developers who try to pre-empt the approval process should be punished with the full force of the law.